The the Call of Duty: World War 2 Champsionship Will be held Sept 29th, 2018, Presented by NetGeekz Media, Mountain Dew, Dominos Pizza, Star 92.7FM & The Cayman Islands Department Of Tourism, Amateur Teams Will Compete in Grand Cayman For a $5,000 Prize Pool and a Chance to earn the title.

We are excited to announce that Gamers Bay, in collaboration with PlayStation®4, will be held at The Camana Bay ARK in Grand Cayman from 9am-7pm, the event will feature up to 75 amateur teams & individuals competing head to head in Super smash bros, FIFA 18, Rocket League and Call OF Duty: World War 2.

Fans who are not able to attend Gamers Bay 3 in person, can catch the action, broadcast live, on youtube, twitch, Instagram and also replays on same channels once broadcast has completed. 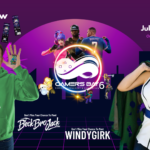