Gamers, YouTubers, cosplayers and fans descended on the John Gray High School gymnasium for Gamers Bay 6 over the last weekend in July.

Competitors went head-to-head on games like Super Smash Bros., Fortnite and FIFA22 on giant screens, for prize money that totaled more than $10,000.

A word from the organizers and co-owners 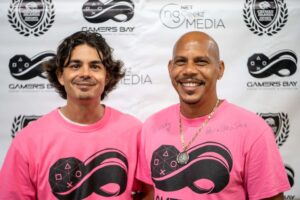 Lance Jefferson described those tournaments as “nothing but nail biting”.

They said the event is growing each year, and would continue to be enhanced with new elements added, like The Matrix joining this latest tournament and offering a chance to play virtual reality games.

“[We want] to give the spectators and competitors a really good experience. At the end of the day, that’s what we’re trying to do,” he said.

One of the aims of Gamers Bay, he said, was to create a platform for local gamers, “so when it comes to these competitions, moving on, if they want to compete internationally, they won’t be at a disadvantage. That’s one of the reasons for the Gamers Bay event.”

He added, “The other reason is, there’s really nothing to do in Cayman for our kids so this is an escape for them, and as you can see, there’s a great turnout.”

The two-day event was opened by Jefferson Saturday morning, along with elected officials André Ebanks and Katherine Ebanks-Wilks.

In a brief speech, Ebanks, whose Ministry of Investment, Innovation and Social Development had helped fund this year’s convention, said he used to be a gamer, and that staying up late into the night playing the original Super Mario Brothers and other Nintendo and Atari games had prepared him for working long hours as a minister.

Ebanks said Jefferson had thought he may have a “really hard sell” when he approached the minister about sponsoring the event, “but the truth of the matter is that I came up as a gamer… so this was an easy thing to support, because it embodies what we mean about investment, innovation and social development”.

He said gaming allows young people to indulge in an innovative activity that “keeps them out of all sorts of trouble,” and helps with reflexes and hand-eye coordination.

Ebanks stood out as the only person in the giant hall in a suit and tie Saturday morning, among T-shirt- and hoodie-clad gamers, but he said he’d be coming back later in the day “more dressed down” with his son. 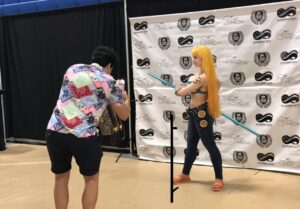 Cosplayers may not have been out in force at Gamers Bay on Saturday, but there was no missing Windy Girk – real-world name Katherine Cal Afú. She was dressed as a pirate – Nami from the ‘One Piece’ anime series – but this pirate is far removed from those you’d expect to see during Cayman’s annual Pirates Festival – no parrot, no eyepatch, no pistol.

Although an avid gamer herself, as a special guest cosplayer, she wasn’t taking part in the competition at Gamers Bay, though she has been waiting more than two years to attend it.

“Lance and Daniel [Scott] contacted me in 2019 [about appearing at the 2020 event] but, because of COVID, it was cancelled. And then they reached out this year as well,” said Afú, who is from Panama.

This is her first time visiting Cayman, which, after three days of exploring the island, she described as “magical”.

“I loved it, everywhere we went,” she said.

As a cosplayer with millions of followers, she gets invited to gaming conventions around the world.

“I’ve been to a lot in Latin America, Mexico, Colombia, the US. I’ve been also in Paris, Brazil, Argentina. A lot of conventions,” she said, adding that she’d missed them while COVID prevented large gatherings from occurring, so was delighted that Cayman’s event went ahead this year.

Cosplay, short for ‘costume play’, involves dressing up a character, from, for example, a video game, anime or other cartoons, movie or TV show. 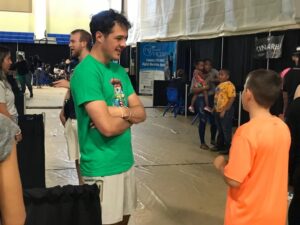 Another special guest, Youtuber and gamer Jack Beck, known online as BeckBroJack where his channel has more than 4.4 million followers, says cosplayers like Windy Girk and the many, many others online and at gaming conventions, add an artistic element to the whole gaming genre.

While Beck, who plays mostly Minecraft on his channel, hasn’t gotten into cosplay himself, he says he may try it out soon.

Some of his YouTube followers were at Gamers Bay this weekend, lining up to have their photos taken with him.

Beck said he hadn’t heard of Gamers Bay when he was first invited as a guest, but “I looked it up and I saw a couple of other YouTubers that have gone here before and it looked like a really awesome event.”

Like everyone else across the globe during the pandemic, Windy Girk and BeckBroJack were pretty much confined to communicating with people over their computers, so when the in-person gaming tournaments restarted, both were more than happy to start travelling overseas again.

“I used to travel quite a bit to different conventions,” Beck said, “so now that everything’s starting to open back up and I was invited here, I was all for it.” 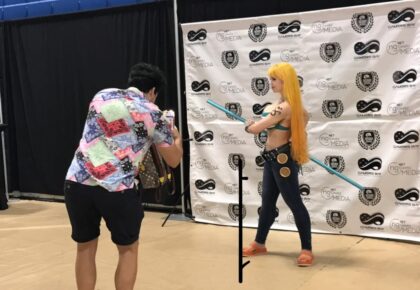